The art of rendering planets has always been a very fascinating aspect of graphics programming, mostly due to the fact that it offers an impressive sense of scale to the player, but also because it pushes the developers to think of new ways to workaround the hardware limitations that comes with objects that exceeds the limit of a floating point. From games such as Spore, Kerbal Space Program or the more recent No Man’s Sky and Star Citizen, we have learned that, although it won’t warrant a good game, planet rendering offers many technical and gameplay related advantages, some more obvious than others.

I started this project mainly to build a framework along side with it, the reason being that planet rendering exposes a lot of edge cases that could not be encountered otherwise. The framework is made in C++ and uses both LuaJIT and luabind (deboostified) for scripting. The core idea is to create all the generic components needed in an engine on the C++ side and then expose them in Lua so that we can seperate all the game logic into a compressed archive, in the same vein as Love2D. It’s basicaly a single Lua context on steroid.

After searching around for a while I found that the most elegant open source approach is by far Proland. It offers many advantages such as having a Deformation class that can be applied to a specific terrain, this allows all the code related to planet rendering to be backward compatible with a regular planar terrain approach.

One of the big challenge to make this approach ready for modern games was to change the rendering type from forward to deferred, this requires a couple of small tricks in order to acheive acceptable results. The firt step is to render the depth, color and normals into a gbuffer, and process the lighting in a post process pass. In order to properly apply the atmosphere lighting I had to rebuild the word space position from the depth buffer. Since the actual camera position exceeds the floating point precision, I rebuild the position using a view matrix that is not translated and add the translation after. The main difficulty I encountered was that now that the position were rebuilt from the depth buffer, I had major precision artifacts in the far view. In order to fix this I split the view frustum into two parts, the near view uses deferred rendering, and the far view uses forward rendering, this way the objects inside the near view have the lighting applied to them without having to modify their original shaders. I expected a major seam artifact at the split location but suprisingly it’s not even visible, meaning that the information rebuilt in the deferred stage is accurate.

At first I tried to implement VSM but unfortunately, the performance I got were actually worse than regular PCF. So in the end I went with Deferred Cascaded PCF Shadow Mapping, I also finally got the shadows to stop flickering when moving by rounding the shadow projection matrix in texel space, a very small but effective tweak.

I implemented HBAO, and combined with a bilateral blur you get a very decent ambient occlusion approximation. 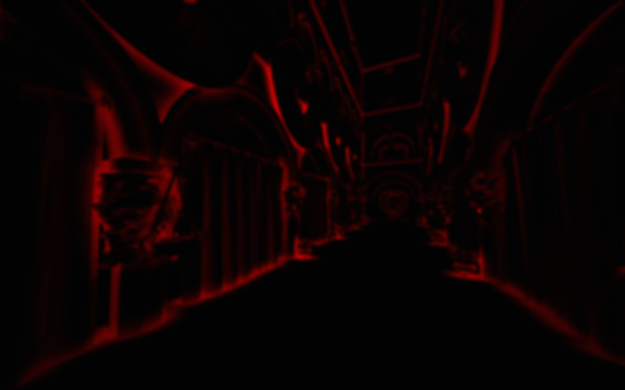 John Chapman framework code is another base I used, mainly for the camera code and the HDR post processing. This effect coupled with motion blur really gives you the feeling that you are seeing the world trough a camera lens, and it’s actually a good thing in a context where you are seeing the world trough a screen. This effect is generated and then applied at the very end of post processing.

Not much to say here, you input a render texture and get a antialiased output.

If you are further interested in planet rendering I would strongly recommend taking a look at Proland publications page, Outerra blog, and Making Worlds by Steven Wittens. I included the scripting side code, keep in mind that this code is in no way release ready nor properly commented, just some work in progress.